How to manage chicken pox in babies?

New parents have a lot on their hands: staying up late with the baby, figuring out exactly how to diaper their baby, feeding it, the list goes on. But you will also be made aware of the various illnesses that your little one could come into contact with. One of these is chicken pox. Chicken pox is a contagious disease caused by a particular virus called varicella-zoster. Chicken pox in babies is actually considered to be quite a normal event that occurs because it used to be so common. However, after vaccinations were invented and administered, the immunization against chicken pox in babies became stronger. It manifests as red spots all over the body that itch, along with a high fever and fatigue.

When do babies get chicken box?

Chicken pox is a very infectious disease that can be contracted anytime if there has been an exposure to it. Even very young babies can contract chicken pox. Sometimes, if the mother has chicken pox during pregnancy or during feeding, the child can get a mild case of chicken pox. Most children have a passive immunity to chicken pox if the mother was vaccinated. Generally in early childhood the cases of chicken pox tend to be milder. A child who has a weak immune system, or an unvaccinated child if exposed to the disease will get chicken pox as well. There is no time frame for when it can affect your little one, but the vaccine for chicken pox can be administered only after the baby has reached 12 months of age.

What causes chicken pox in babies?

To understand what causes chicken pox in babies, the parent has to know that chicken pox is one of the most contagious diseases, one might not even know that it has spread until symptoms show up. Any direct physical contact or even through the sneeze or cough of an infected person can cause this disease to occur. It is mainly contracted through the nose and mouth. If the child is exposed to a person that has shingles and comes in direct contact with the fluid that oozes out of shingles blisters, this could also cause chicken pox in babies because of the common virus present in shingles and chicken pox. However, adults cannot contract chicken pox through an exposure to shingles. Steps should be taken to avoid getting your little one in contact with anyone who might have chicken pox, or even anyone recovering from it. Staying in the same room could pass the disease on too since it is spreadable by air as well.

What are the signs and symptoms of chicken pox in babies?

After around 1 or 2 days, the telltale rash which is the most evident symptom of chicken pox in babies appears. The most common places for the red itchy rash to appear are the scalp, face and torso. There will be red itchy spots that surface all over the body after the initial rash breaks out. These spots could be little or as much as 500 of them all over the body! They are extremely itchy and might cause your little one a lot of discomfort. Remember that their cries will be louder and more frequent because they are going through a lot. The spots will eventually turn into blisters filled with fluid.

As you may have guessed it, scratching the blisters or sores will only make the situation worse because it leaves scars on the baby’s skin. No matter what, you should make sure the blisters aren’t fussed with because they could easily get infected as well. Once the blisters fill up with fluid, they tend to burst on their own and leak out. These sores will then turn into scabs that will heal completely and leave no scars if not picked at. Chicken pox symptoms in babies can start to show 10-12 days after coming into contact with the virus, so it is hard to know when exactly it occurred.

What are the treatments for chicken pox in babies?

Since it is a virus, there is very little medicine that can cure this disease. Normally it is a waiting game along with many homemade remedies that can ease the symptoms of chicken pox in babies. Contact your GP immediately if you start to notices rashes accompanied with fever. Chicken pox treatments for babies involve:

Chicken pox can last from 5 to 10 days depending on the severity of the disease. Babies tend to have milder cases of chicken pox.

Is chicken pox dangerous for babies?

There are many dos and don’ts involved for babies and infants with chicken pox. While it is a very common disease that passes by with time and proper care, there are some causes for concern that you as a parent should be aware of. 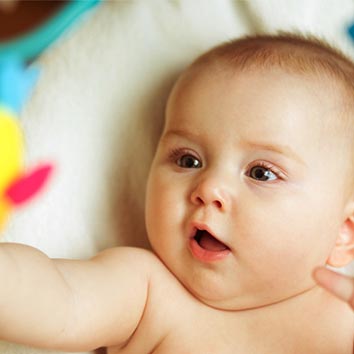 Your heart overflows with happiness and love when your baby grins on seeing your face, laughs at your peek-a-boo games and stops crying as soon as you take her in your arms. How does your baby react to your actions and gestures has everything to...

Your baby's skin is so soft and smooth and just delightful to touch. However, this also means that the skin is very sensitive and prone to bouts of the occasional irritating skin problem and when baby is irritated, chances are, so are you. Huggies® can help you along by identifying and offering treatments for specific skin conditions as well as general baby skin health care tips and advice.

Things to keep in mind while preparing your baby’s bed.

Making your baby's cot is a simple and quick everyday task but remember that how you make it is really important. Use the following guidelines that have been supplied by SIDS and Kids Australia as part of their Safe Sleeping Guidelines to ensure your...

3 food principles for a healthy baby.

3 food principles for a healthy baby. As a new mom, it can be quite comforting to know that for the first 6 months, your baby only needs breast milk (ideally) or formula. The fact that you won’t have to plan out nutritious meals can help ease...

Baby sign language is the practice of using simple sign language or gestures to assist parents, family and child care workers to communicate with pre-verbal babies. You may find that you already use some of the basics. Several studies have...

In today’s world that is so conscious of health and hygiene, it’s easy to get commercial baby food products that is nutritious for your little one. Nevertheless, we should be selective when choosing commercially prepared baby foods. Make...

5 things to remember while stepping out with your baby.

Although parenting advice is freely available, most of it is actually learnt on the fly. Make checklists to reduce some of the uncertainty that goes with this job, and use them until they become second nature. Here are 5 guidelines for keeping your...